A Catholic parish priest denied Holy Communion to Robert Troy, a Fianna Fáil member of the Irish parliament, at a recent funeral mass. Troy is the opposition spokesman on Transport and Tourism and one of Ireland’s rising young political stars.

The stated reason was that Troy voted to legalize abortion services in Ireland. Fr John Hogan, parish priest of Multyfarnham in Co Westmeath, denied the host to Troy during a requiem mass at St Nicholas’s parish church.
The priest had tweeted on December 1: “Looking over list of TDs who voted to reject amendments to the wicked abortion bill, I see the name of one who, only a few years ago, stood in my house & swore he was pro-life. The desire for power & popularity lead so many to do the most horrendous things. A salutary lesson.”
Troy, 37 and a former banker who had been regarded as “anti-choice,” revealed last month in an interview with Ireland’s Hot Press magazine why he voted yes.
“By voting no, would it prevent one termination?
“And I then said, ‘No, because what it does is, it victimises women and it forces them to go abroad.’ While I had concerns about the 12-week nature, I ultimately came down with the decision to vote yes.”
The Irish edition of the London Sunday Times Source says Thomas Deenihan, the bishop of Meath, which includes Hogan’s diocese has spoken to Father Hogan but refused to discuss what was said.

Hogan had been in controversy previously when he spoke out against civil partnership for gays, alleging Catholic politicians who supported it could not remain “in good standing with the church.”
The Times reports that “Hogan is also the director of the Fraternity of St Genesius, a Catholic association which says its members support ‘the men and women of the theatrical and cinematic arts through their daily prayers and sacrifices.’ A book he wrote, entitled Devotions to St Thomas Becket, was published last month.”
He is also very supportive of US efforts to ban abortion.
On January 18, he tweeted: “Every good wish & blessing to all my friends Stateside who are participating in the March for Life. Your continued witness is making a difference in the US: keep it up! Please remember & pray for us in Ireland as our campaign of resistance must now intensify for the cause of life.”
It is just the latest example of the backlash to the abortion vote. Last week Josepha Madigan, the Culture Minister who spearheaded the drive to legalize abortion was denied a meeting room at a Catholic institution owned by the Sisters of Mercy.
The nuns’ congregation said “threats have been made of busloads of protesters being brought to the site.
“Many of the representations made to us refer to the speaker’s connection with the abortion referendum and bill, even though this topic is not the subject of her presentation,” Mary Reynolds, chief executive of the Mercy International Association, said in a letter.

I wanted to drop you a note to say that I was very angry about John Hogan setting himself up as God, judging your conscience and refusing you Holy Communion.

I am NOT pro abortion but see it as the lesser of two evils in some very sad cases – like saving the life of a mother and in the case of rape etc.

However, you followed your Christian conscience in your decision about the vote – a hard decision to make – and only God is competent to judge your conscience.

This priest, Hogan, is playing God’s role and judging you.

He is absolutely in the wrong.

And one wonders what “sins” there are in his own life.

If you ever want to receive Holy Communion or a sacrament from me – I will serve you in that way.

The only one whose judgement we should fear is God’s – and certainly not a cleric of the Catholic Church which is constantly being shown to be corrupt and abusive to the core.

By the way, I am a Tullamore man.

I think that Priest Hogan must be some kind of right wing nut case?

I never of him until yesterday.

When I tried to look him up I found his Twitter account and discovered he had pre blocked me from viewing it.

If Hogan thinks that he can judge the conscience of another human being – he must also think that is a pure and sinless as Jesus was.

As he has taken it upon himself to publicly judge, condemn and refuse the Body of Christ to a fellow Christian – he has now become a legitimate target for the rest of us making inquiries into his own life, actions and “sins” – as Jesus said: “Let him who is without sin cast the first stone”.

So, I would like to hear from people about this priest, Hogan!

What is the parish priest of a small rural parish doing establishing a Fraternity to pray for actors and their families?

I wouldn’t think that there are too many actors in Multyfarmham – apart from the PP. 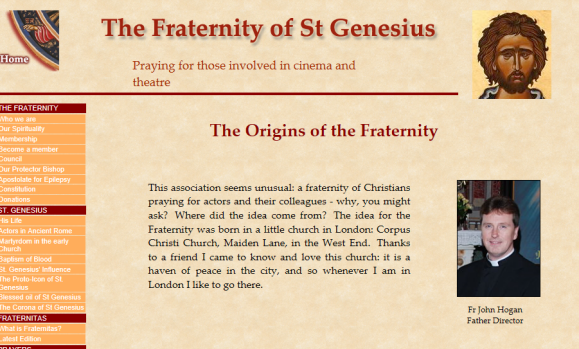