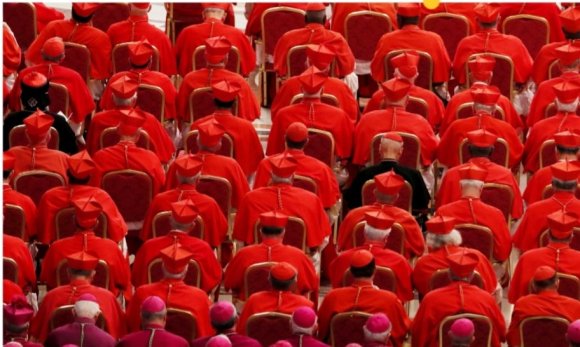 On the day that Pope Francis’ sex abuse summit is due to start, a potentially explosive book will be published claiming to lift the lid on gay priests in the Vatican and the double lives of senior officials.
The book, “In the Closet of the Vatican”, written by French sociologist and journalist Frederic Martel, reports that around 80 per cent of clerics working in the Roman Curia are gay – although not necessarily sexually active – and details how they adhere to an unspoken code of the “closet”.
After four years of gathering material which took him across the world Martel, a non-believer who is openly gay, spent around a week a month in Rome, sometimes staying in residences inside the Vatican or on Holy See property. He claims to have completed 1,500 interviews with 41 cardinals, 52 bishops and monsignors, 45 papal ambassadors or diplomatic officials, 11 Swiss guards and more than 200 priests and seminarians. The book is due to be published on 21 February simultaneously in 8 languages across 20 countries and will hit stores as bishops from across the world gather to discuss how to respond to clerical sexual abuse.
Defenders of “In the Closet” say that Martel will reveal the problems of a dysfunctional clerical culture that is in denial about sex, while others argue the timing of the book’s publication will once again unfairly conflate homosexuality with sexual abuse of children and intensify a witch hunt against gay priests.
Sources say that Martel’s research reveals that while some gay priests accept their sexual orientation and a number maintain discreet long term relationships, others live more extreme double lives through casual encounters and the use of male prostitutes, while others are in denial about their sexuality. He is said to argue that the intra-church battles of recent decades should be read through a closeted gay paradigm. Those with knowledge of “In the Closet” say the French writer reserves his harshest criticism for senior figures in the Church who have attacked homosexuality yet are secretly gay. One of the “rules” of the Vatican’s closet, Martel argues, is that the more a cardinal or bishop denounces homosexual behaviour or same-sex couples the more likely they are to be gay.
While, sources say, Martel does not focus on the sexual abuse of children, he alleges that the secretive sexual culture among clerics made it difficult for them to denounce priests accused of abuse. “In the Closet” claims that Pope Francis has sought to break up this pattern of behaviour by repeatedly condemning priests living a “double life”. At the same time, Martel argues that in doing so he has made the Church an unstable structure for closeted gay clergy, which in turn purportedly explains some of the opposition that Francis is facing from inside the Church.
One of the most explosive claims in the book, sources reveal, centres around deceased Colombian Cardinal Alfonso López Trujillo. Cardinal López Trujillo, a former President of the Pontifical Council for the Family, and said to have been for many years the chief obstacle to the canonisation of St Oscar Romero, is presented as both an arch-defender of the Church’s teaching on contraception and homosexuality while also using male prostitutes.
“It is not always easy to tell when Martel is trafficking in fact, rumour, eyewitness accounts or hearsay,” says a source with knowledge of “In the Closet.”
Among those Martel interviewed was German Cardinal Walter Kasper, who agrees that some in the Vatican hide their sexuality but adds that what most worries him is not sexual orientation, but whether the Church is helping people find the way of God.

While supplying in the States I once met a senior priest of NY who knew Mary! He said the priests of the archdiocese used to refer to their archbishop as being “on his knees, overseas” when visiting the US Military stationed abroad (Spellman was chief military chaplain). He wasn’t saying his prayers with the young men

It would be a grave mistake to think that homosexuslity among the hierarchy and clergy began with Vatican 11 in the early 1960s.

Homosexuality among the hierarchy and clergy is 2000 years old.

But it is more common now than ever.

Why is it increasing? 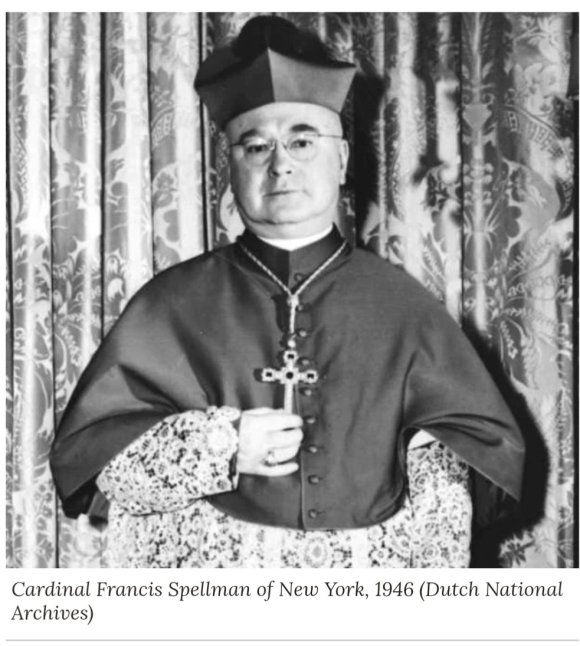 A journalist claimed Spellman tried to grope him while he was a cadet in the 1960s
The Archdiocese of New York has said it had only recently learned of an allegation that the deeply influential Cardinal Francis Spellman groped a visiting West Point cadet in the 1960s, but says it will take the accusation seriously and has invited the accuser to contact the archdiocese.
“This is the first time we have learned of this allegation, and take what the writer says seriously, as we do all allegations of abuse or inappropriate conduct,” Joseph Zwilling, director of communications for the Archdiocese of New York, told CNA on February 11. “We have never had a substantiated allegation of abuse against Cardinal Spellman, who died in 1967.”
Lucian K. Truscott IV, a longtime journalist and writer, made the claim about the former Archbishop of New York in a February 9 essay at Salon.
According to Truscott, the alleged incident took place in 1967 in Spellman’s private quarters behind St Patrick’s Cathedral. Truscott said he was a junior at West Point who had sought to interview Spellman for the cadet magazine, The Pointer.
In Truscott’s account, apparently written decades after the fact, he was in a sitting room with the 77-year-old Spellman, his monsignor assistant, and two other West Point cadets, including the magazine’s photographer. Even before the interview began, Spellman placed his hand on the cadet’s thigh and attempted to grope him, Truscott said.
According to Truscott, the monsignor intervened, chastised the cardinal, and placed the cardinal’s hand back in the lap. Truscott said this happened several times during the interview.
Truscott wrote that the cardinal gave him a small gift after each attempted incident of groping. “He did it over and over again, and I just kept asking questions and recording his answers like nothing happened. I left the cardinal’s residence that day carrying a couple of tie clasps, three key chains, and a couple of gold-plated tie tacks,” the essay claimed.
Truscott said he was shocked the incident happened in front of others and was sure he would not be believed if reported. He claimed the photographer had taken photos of the incidents and he and the other two cadets treated it as a joke after it was over.
Truscott said he now wishes he hadn’t laughed off the experience and wishes he had reported it instead, given revelations about sex abuse in the Church.
“I wasn’t an innocent victim. I was an adult, a cadet at West Point, and I knew better,” said Truscott.
Zwilling said the archdiocese encourages reports about alleged misconduct.
“We would welcome Mr Truscott in contacting the archdiocese, and reporting his allegation to our Safe Environment Director and/or the Victim Assistance Coordinator, so that we might offer whatever assistance might be needed,” Zwilling said.
While Truscott was not a minor at the time of the alleged incident, the New York legislature recently passed legislation extending the period for child victims of sex abuse to bring civil charges until the age of 55. Criminal prosecutions can be brought before the victim turns 28.
The legislation also creates a one-year window for victims of any age to come forward.
Cardinal Spellman was one of the most deeply influential churchmen of the United States.
Originally a priest in the Archdiocese of Boston, he worked in the Vatican’s Secretariat of State in the 1920s and 1930s and smuggled Pope Pius XI’s anti-fascist encyclical “Non Abbiamo Bisogno” to Paris for its 1931 release. He served as an Auxiliary Bishop of Boston from 1932-39, and was named Archbishop of New York by Pope Pius XII, a role that included oversight of the military vicariate of the armed forces during the Second World War and beyond.
He was a staunch anti-communist close to controversial FBI director J. Edgar Hoover. He has been the subject of rumors about sexual misconduct, though not necessarily abuse.
The cardinal’s lengthy FBI file, as published in a somewhat redacted and possibly incomplete form at the FBI website, includes many interactions with the bureau and with Hoover; his public statements and speeches; and information about Vietnam War protests targeting the cardinal. At one point a January 20, 1954 memorandum to Hoover described Spellman an FBI contact who “can be of assistance in furnishing information concerning prominent Catholic priests and laymen” and who has “on several occasions made available information in connection with research matters.”
The released files include a December 1954 request from Spellman’s office to the FBI to investigate an anonymous tip that a communist-linked publisher aimed to print a book vilifying the cardinal and the Catholic Church, apparently claiming the cardinal had a scandalous relationship with a woman.
FBI agents found no proof that such a book was forthcoming.
The publisher of a Spellman biography released in 1984 removed a passage citing several people who claimed he had a homosexual relationship; none of them had direct proof, the New York Times reported.

It has been generally accepted for years that Spellman was an active homosexual who had many sexual partners.

He also had himself dispensed from saying the Divine Office because he was “too busy”.

He was really more of an administrator than a pastor.

But I have heard he was known to perform very kind human acts.

His case is further indication that a great number of bishops and priests have been active homosexuals.

Cardinal Cody of Chicago used to out dressed as a women with J Edgar Hoover of the FBI. 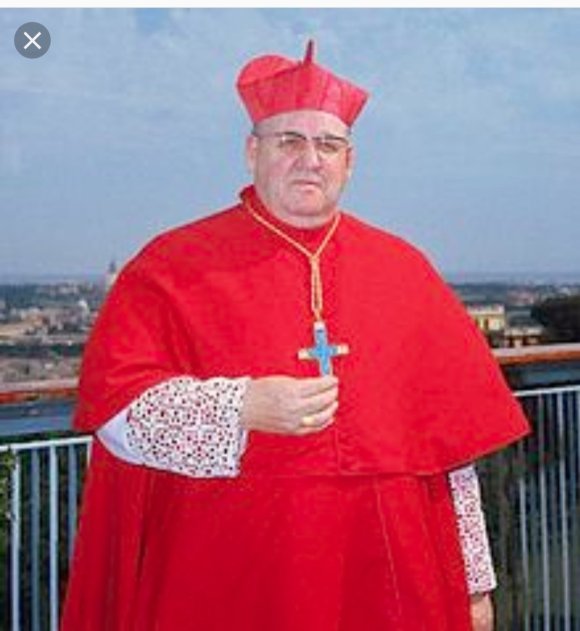