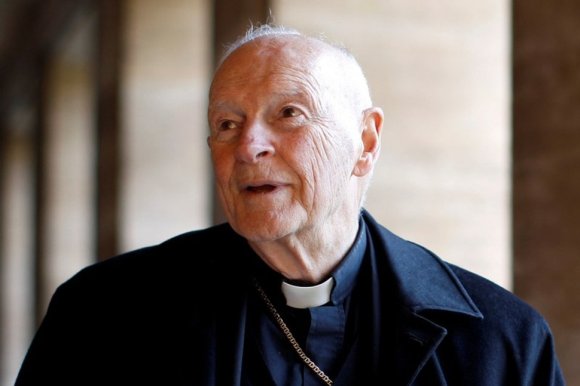 Pope Francis and the Congregation for the Doctrine of the Faith ordered this week the laicization of Theodore McCarrick, a former cardinal and archbishop emeritus of Washington, and a once powerful figure in ecclesiastical, diplomatic, and political circles in the U.S. and around the world.
The decision followed an administrative penal process conducted by the CDF, which found McCarrick guilty of “solicitation in the Sacrament of Confession, and sins against the Sixth Commandment with minors and with adults, with the aggravating factor of the abuse of power,” according to a February 16 Vatican communique.
The conviction was made following an “administrative penal process,” which is a much-abbreviated penal mechanism used in cases in which the evidence is so clear that a full trial is unnecessary.
Because Pope Francis personally approved the guilty verdict and the penalty of laicization, it is formally impossible for the decision to be appealed.
According to a statement from the Vatican on February 16, the decree finding McCarrick guilty was issued on January 11 and followed by an appeal, which was rejected by the CDF on February 13.
McCarrick was notified of the decision on February 15 and Pope Francis “has recognized the definitive nature of this decision made in accord with law, rendering it a res iudicata (i.e., admitting of no further recourse.)”
CNA contacted this week McCarrick’s canonical advocate, who declined to comment on the case.
McCarrick, 88, was publicly accused last year of sexually abusing at least two adolescent boys, and of engaging for decades in coercive sexual behavior toward priests and seminarians.
The allegations were first made public in June 2018, when the Archdiocese of New York reported that it had received a “credible” allegation that McCarrick sexually abused a teenage boy in the 1970s, while serving as a New York priest. The same month McCarrick stepped down from all public ministry at the direction of the Holy See.
In July, Pope Francis accepted his resignation from the College of Cardinals, ordering McCarrick to a life of prayer and penance pending the completion of the canonical process concerning the allegations. Since the end of September, McCarrick has been residing at the St. Fidelis Capuchin Friary in Victoria, Kansas.
Key among McCarrick’s accusers is James Grein, who gave evidence before specially deputized archdiocesan officials in New York on December 27.
As part of the CDF’s investigation, Grein testified that McCarrick, a family friend, sexually abused him over a period of years, beginning when he was 11 years old. He also alleged that McCarrick carried out some of the abuse during the sacrament of confession – itself a separate canonical crime that can lead to the penalty of laicization.
The CDF has also reportedly received evidence from an additional alleged victim of McCarrick – 13 at the time of the alleged abuse began – and from as many as 8 seminarian-victims in the New Jersey dioceses of Newark and Metuchen, where McCarrick previously served as bishop.
As emeritus Archbishop of Washington, D.C., and before that Bishop of Metuchen and Archbishop of Newark, McCarrick occupied a place of prominence in the US Church.
He was also a leading participant in the development of the 2002 Dallas Charter and USCCB Essential Norms, which established procedures for handling allegations of sexual abuse concerning priests.
Though laicized, McCarrick does not cease to be a bishop, sacramentally speaking, since once conferred, the sacrament of ordination and episcopal consecration cannot be undone.
The penalty of reduction from the clerical state – often called laicization – prevents McCarrick from referring to himself or functioning as a priest, in public or private. Since ordination imparts a sacramental character, it cannot be undone by an act of the Church. But following laicization he is stripped of all the rights and privileges of a cleric including, in theory, the right to receive financial support from the Church.

James Green, his best known victim, commented that there are no winners here.

The truth will set you free! What about the Bishop of Galway allowing a priest to continue his duties in a community whilst an investigation into allegations of abuse is taking place. You see Pat, nothing has changed in the church it’s the same old story let’s just pretend nothing like that ever happens here and it might just go away. Shame on Brendan Kelly 😡