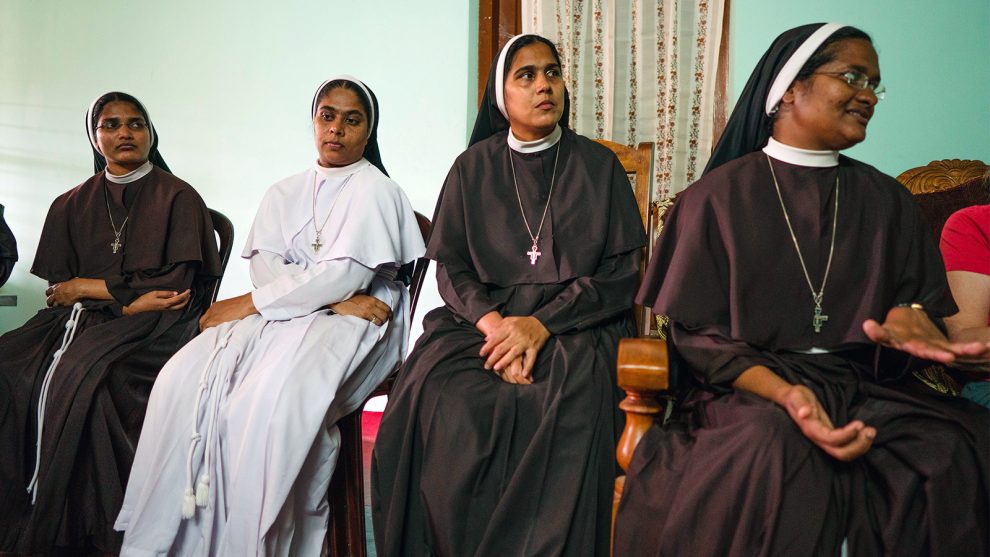 KOCHI, India (RNS) — In the dirt courtyard of St. Teresa’s Women’s College, in this port city in the southern Indian state of Kerala, a group of nuns cast curious glances toward a knot of chatty first-year students huddled together. The young women are mindful not to speak too loud, lest the sisters overhear the topic of their conversation — the alleged rape of a nun by the bishop who oversees a local religious order.

Bishop Franco Mulakkal, a native of Kerala, an enclave of Christians in predominantly Hindu India, is accused of attacking the nun nine times between 2014 and 2016.

What has made the charge of rape more shocking is the Catholic Church’s silence about the allegations.

“Clergy are to be respected no matter how bad,” said 17-year old Catherine, who asked that her last name not be used. “Whatever they do, it must be covered up by the church.”

Mulakkal is facing charges more than two years after the victim, whose name is being withheld, reported the alleged attack to church authorities. When no action followed, the nun approached several bishops, a cardinal and eventually the Vatican’s diplomatic envoy in India, telling them that Mulakkal had raped her while visiting Kerala from his diocese in the northern city of Jalandhar.

The bishop customarily stayed at the survivor’s convent in Kuravilangad, a city two hours’ drive from Kochi, when he returned to his home state. 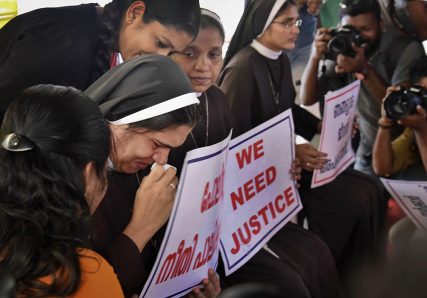 A Catholic nun cries as she participates in a sit-in protest demanding the arrest of a bishop whom one nun accused of rape, in Kochi, Kerala, India, on Sept. 13, 2018. The protest followed a June complaint to police by a Missionary of Jesus nun who accused Franco Mulakkal, now the bishop of the city of Jalandhar, of repeatedly sexually abusing her from 2014-2016. (AP Photo)

The victim’s request to officials was not to prosecute the bishop, but to be transferred to a convent outside of Mulakkal’s authority. The nun’s congregation, the Missionaries of Jesus, is based in the Jalandhar Diocese.

Only after five of the victim’s fellow nuns staged a 15-day protest outside Kerala’s high court building in Kochi last summer was the bishop, who denies the charges, arrested. He has since been free on bail.

Mulakkal’s charges include unnatural intercourse, intimidation and illegal confinement. Police who led the investigation said the charge sheet includes statements from 83 witnesses, including a cardinal, three bishops, 11 priests and 25 nuns.

If convicted, Mulakkal faces the maximum penalty of life imprisonment. The case is the first sexual abuse case involving a bishop to go to trial in India.

The charges mark a significant victory for the nuns, who continued to demand justice despite intense — and increasingly threatening — pressure to remain silent.

“Bishop Franco was torturing the sister and all of us,” said Sister Anupama Kelamangalathuveliyil, barely audible over a roaring ceiling fan fighting the heat in a small, pale-blue sitting room at St. Francis Mission Home in Kuravilangad. “Our situation led us to have the protest, but it’s not that we are courageous. We saw that it is needed, otherwise our lives would be in danger.” She sat shoulder-to-shoulder with her sisters in dim daylight, facing a framed photo of Pope Francis on the opposite wall.

“If we did not come out, then our survivor sister would have collapsed — she was undergoing so much pain,” she continued. “Our congregation members isolated us; our congregation sisters are not supporting us. Those sisters who are supporting us, their superiors are pressuring them to stay silent.”

Speaking out alongside Kelamangalathuveliyil were Sisters Alphy Pallasseril, Josephine Villoonnickal, Ancitta Urumbil and Nina Rose. All said they never intended to embroil the Catholic Church in a scandal. When they learned of the survivor’s claims of abuse, they supported her efforts to raise a complaint with church officials.

“If the church was giving us justice, then we didn’t want to spoil its name,” Kelamangalathuveliyil said. 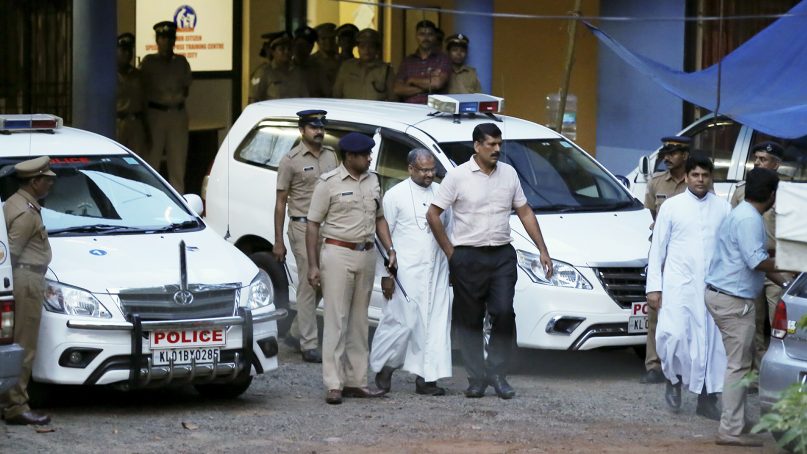 The bishop of the Indian city of Jalandhar, Franco Mulakkal, center, leaves after being questioned by police in Kochi, India, on Sept. 19, 2018. Indian authorities charged the Roman Catholic bishop with repeatedly raping a nun in her rural convent, a case that helped make the sexual abuse of nuns a major issue in the church. (AP Photo/Prakash Elamakkara)

Neither the Vatican nor the sisters’ order responded to calls asking for comment on the case.

Some church officials initially assured the victim they would address her complaint so long as she remained quiet about the abuse, Kelamangalathuveliyil said. When nothing happened, the nuns joined their sister in writing several letters to the Vatican — including one addressed directly to the pope — but received no reply. Finally, in June 2018, the survivor went to the police.

They were slow to act, too. It was three months before Mulakkal was arrested, largely at the prompting of the Rev. Riju Kanjokaran, an evangelical Protestant minister, who helped stage the nuns’ demonstrations, which came to be called “Save Our Sisters,” at the local diocesan seat in Kochi. 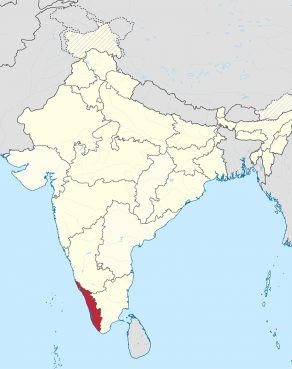 Members of several Christian organizations and the five nuns drove two hours every day to Kochi to demonstrate. For two weeks in September, they sat in a main square holding signs that called for justice from the police and the church. Mulakkal was arrested Sept. 21.

Kanjokaran said he was surprised at how quickly the nuns drew support. “Over 1,000 people and organizations came and gave solidarity to this particular movement. It was not just Christian organizations — it was residents and people of every religion.”

Some officials of the Syro-Malabar Church — the historic Eastern church here that is in full communion with Rome — criticized the protests. The Rev. Davis Madavana, a priest at St. Mary’s Syro-Malabar Cathedral in Kochi, said the protesters were “looking for reasons to quarrel with the church.” He also argued that the nuns shouldn’t have taken to the streets when there is a proper procedure for filing complaints with officials.

“We support them, but not the way they want to deal with the situation. They did not have to put the church through such public ridicule,” he said, overlooking the long, tree-lined courtyard of his basilica from a shaded balcony. “They wanted to show themselves as martyrs.”

Bishop Joseph Kariyil, who heads the Cochin Diocese in Kochi, said the media used the demonstrations to paint the church as corrupt. While he agrees that many instances of sexual abuse go unreported, he believes plenty of reported cases are not legitimate. Those who wait years to report assault to the church should be investigated carefully, he said.

“Suppose after 40 or 50 years, you say, ‘He patted me like that and I feel violated.’ At that time you didn’t feel that way. But years later you remember that negatively, whether that man did it purposefully or not,” Bishop Kariyil said. 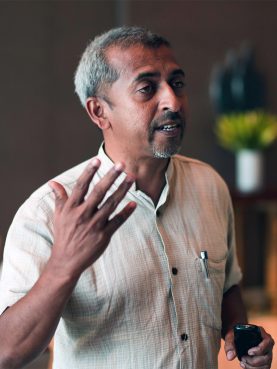 The Rev. Augustine Vattoly, a priest in the Ernakulam-Angamaly Archdiocese and an organizer of the September 2018 Save Our Sisters protest in Kochi, Kerala. Photo by Richard Tamayo

Supporters of the nuns insist it’s the church’s severe culture of silence and the unquestioned authority of clergy that keeps survivors quiet. The Rev. Augustine Vattoly, a priest in the Ernakulam-Angamaly Archdiocese, has been critical of what he considers a toxic system.

“The brutal thing you should understand is how this bishop got this arrogance. It is the unquestioned power that he wields,” he said. “In the Catholic Church he is 100 percent sure that he will not be questioned by this ‘little, simple creature — this nun.’”

Laypeople are taught not to question their religious superiors, and nuns learn to be obedient, Vattoly explained. “It’s because of the age-old belief system that asking questions of priests and bishops is sinful — that they will go to hell,” he said.

For young Catholics like Catherine and her friends, even asking simple questions can be scary. She said the nuns who run her college, who are of a different order than the victim, discourage curiosity and reprimand students who display it. “They say, ‘Calm down. You are the children of God.’”

Her classmate Renu Dominic, 18, remains a practicing Catholic but says young people are questioning their ties to religion. They’ve come to expect church corruption and are exhausted by it, she said.

Vattoly agrees. He said that if the bishop is not convicted, 90 percent of young believers will walk away from the church. The institution, he said, will need to overhaul its values and structure to keep them.

“If there is transparency, there is credibility,” Vattoly said. “If there’s credibility, then future generations will continue to believe.”

The sexual abuse and rape of nuns by bishops and priests is an old and tragic ussue.

It is compounded by the silence of religious superiors and the hierarchy is another scandal.

The RC church has failed all its vunerable people.

The Vatican is a rogue “statelet”.

The Italians should revoke the 1929 concordat so that the V should be subject to Italian, European and international law.