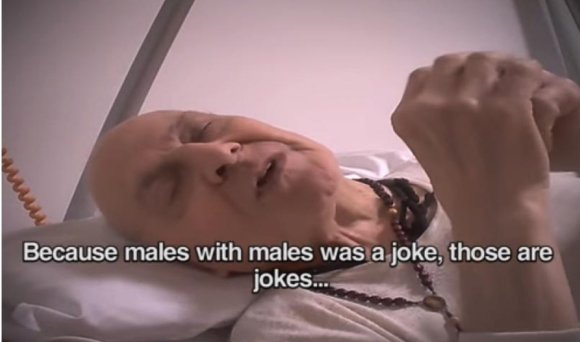 An elderly Catholic priest, apparently in an Italian hospital, was caught in an undercover video laughing and joking about his own sexual assault of boys — along with assaults of other priests — at a diocesan home for deaf-mute children.
The 2017 video shows Italian Father Eligio Piccoli recounting unapologetically — almost boastfully — how he abused boys.
“I lost my head and grabbed him from behind,” he said.

With gestures, Piccoli simulated sodomitic acts that priests and other religious allegedly committed with minors. In one instance, Piccoli pointed at the undercover journalist as if to humor him about homosexual rape.

“By touching, it (the male organ) becomes hard, you know? Dammit, come on,” he jokingly told the undercover journalist.
Now an invalid, Piccoli laughed as he recounted the names of several priests and religious who allegedly fondled or raped minors at the Provolo Institute for deaf-mute children in Verona, Italy.
Piccoli is one of several priests and staff of Provolo Institute in Italy, which was operated by members of the Community of Mary religious congregation.
“With those kids,” Piccoli tells the hidden camera while wearing a rosary around his neck, “the only joke I did was to touch one, even though I shouldn’t have done so.”
The video was recorded by a journalist for Fanpage.it, an Italian website.
“It was a young one who came to my room. He was cuddly. While the rest of the children were playing, he wasn’t. It was cold, so I said, ‘Come into my room,’” Piccoli said to the journalist, who claimed to be a former student while asking about accusations of sex abuse by priests.
“At a certain moment,” Piccoli said, “he showed me his male member. Some of what they say is true, but … all of them (the former students) are corrupt. They touch each other; they masturbate.”
In the video, Piccoli said at least 10 priests abused children at the Provolo Institute. When they were found out, he said, they were transferred.
“To one of them they said, ‘Either you go to America or go home,” he said in the video. Piccoli clarified, “Yes, to Argentina, Argentina,” in reference to the transfer of the accused pedophiles.
“It wasn’t a sin,” Piccoli said in the candid video, adding, “Doing among males was a joke. But to do it with a woman is more serious. If one does it out of necessity, to make a joke, is nothing. It’s like having the vice of smoking.”
Several of the victims have given accounts of experiencing and witnessing abuse while they were at the Provolo Institute in Italy.
In 2009, 67 former students of the Provolo Institute accused priests, nuns and consecrated laity of sexual abuse of children under their care during a period extending from the 1960s to the 1980s. The Fanpage.it video was uploaded in February 2017 and has circulated widely.

Piccoli is now more than 85 years old and was receiving care in December 2017 at a residence for elderly priests at Negrar, a town approximately 10 miles from Verona in northern Italy. According to the Argentine newspaper Clarin, Piccoli was later moved from Negrar to an undisclosed location, where he is protected by officials of the Diocese of Verona.
According to Clarin, out of consideration for his age and precarious health, Piccoli was ordered by the Catholic Church to conduct a life of prayer as penance for his crimes, which were uncovered in 2009. The only one of the priests in Italy to receive canonical sanction by the Catholic Church for crimes at the Provolo Institute, Piccoli was also ordered to stay away from children and submit to monitoring by the Church.
According to Fanpage.it, the statute of limitations has prevented Italian government authorities from pursuing criminal charges. After Provolo alumni went public with their charges, a Vatican investigation ensued, followed by an official apology in 2012. Provolo victims later accused the priest Nicola Corradi of serial abuse while noting that he had been transferred to the Provolo Institute’s sister facility in Argentina.
The 2017 video gained further relevance after a press conference on Monday in Argentina. In a video interview with Mendoza TV, Anne Barret Doyle of BishopAccountability.org called on Pope Francis to return to his native country to apologize to the approximately 20 victims that prosecutors say were abused at the Provolo Institute in Mendoza province. More than a dozen persons are facing charges.
Two priests, octogenarian Nicola Corradi and 58-year-old Horacio Corbacho, as well as three other men were arrested in 2016. Corradi has been accused of abusing children in Italy, from whence he was transferred. Both Corradi and Corbacho are facing a preliminary hearing, which critics say has been too long in coming.
Unlike the cases in Italy, the statute of limitations has not expired in Argentina. Reportedly, Corradi and Corbacho have not faced canonical sanctions by the Catholic Church.
Doyle said in the video interview that she and fellow activists seek to show solidarity with the Provolo victims and to seek justice.
“Pope Francis owes them a personal apology for his complicity and silence,” Doyle said. “The Italian victims warned him for years that Corradi and others were working with children in Argentina. The Pope did nothing.”
Pope Francis has not visited Argentina since assuming the throne of St. Peter in 2013.
Despite Pope Francis’ statements in Heaven and Earth, a book jointly written with Rabbi Abraham Skorka, that there were no pedophile priests in his Argentine diocese before he was elevated to the papacy, according to a German TV documentary, he sought to defend Father Mauro Inzoli from accusations of pedophilia, reinstating his priestly faculties despite advice from Cardinal Gerhard Muller.
In another case, Fr. Julio Cesar Grassi was sentenced to 15 years after being convicted of sexual abuse of minors during his time in the diocese then under the authority of Pope Francis, who was then Archbishop Jorge Bergoglio.
BishopAccountability.org also wants Pope Francis to investigate Archbishop Marcelo Colombo of Mendoza. Doyle said in the video interview that Colombo refuses to provide information to prosecutors about the accused clerics. However, Colombo told the media last year that he wants to help victims of abuse.
In the video interview, Doyle theorized that there may be as many as 1,300 cases of clerical abuse still to be revealed in Catholic Church files in Argentina.

This elderly, retired, sick priest laughs about the deaf boys he and his fellow priests abused!

How truly sick and evil is that?

But I have personally witnessed cynical priests laughing at vulnerable people.

It happened in the dining room of St Peter’s Cathedral in Belfast in the very late 1970s.

Five of us were in the dining room waiting for lunch to arrive on the dumb waiter.

Fr Joe McGurnaghan was look g out a window and spotted a lady in her 80s struggling with two heave shopping bags. He called Fr. Vincent McKinley to the window saying: “Vincent, come here and see this bandy legged old f*****”.

McKinley went to the window and they both laughed and McKinley said: “I wouldn’t like like a whiff of the gusset of her knickers”.

And they both had a great laugh.

When priests become as cynical as that they laugh with other at the horrible things they say and do.

These things have their origin in satanic evil

As a Pope has said: “The smoke of evil has entered the church”.

And the laity are not his instruments.

His instruments are the clergy and hierarchy. 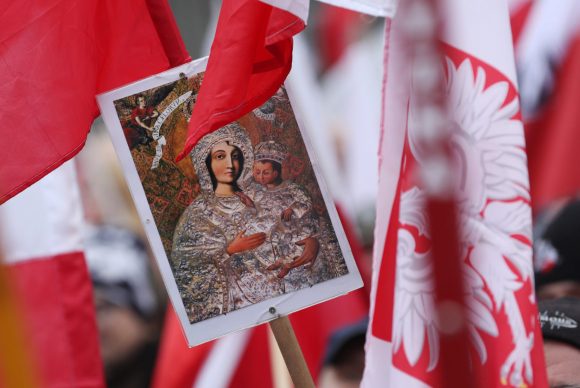 In Poland, the Roman Catholic church has more than a purely religious function | Sean Gallup/Getty Images

A documentary exposing child sex abuse in Poland’s Roman Catholic Church has turned religion into a key issue ahead of the European election.
The film, “Tell No One,” showing how abusive priests destroyed the lives of their victims and faced no consequences, has shocked the overwhelmingly Catholic country in which the church is a key political player; released on Saturday evening, it had been viewed more than 8.1 million times on YouTube as of Monday afternoon.

The unflinching look at abuse in the church adds Poland to the list of countries — from the U.S. to Canada, Ireland, Australia, the Netherlands, Germany, Chile and more — that have been forced to deal with clergy child sex abuse scandals.

In Poland, where the church has more than a purely religious function — seeing itself as a force that defended the nation during times of oppression, and which now has enormous influence over education, culture, the law and politics — the scandal has quickly taken on a political dimension.
The ruling Law and Justice (PiS) party has struck a tight alliance with the majority of Polish bishops. Many priests, especially in smaller towns and villages, often openly back the party.
“Who raises a hand against the church, wanting to destroy it, raises a hand against Poland,” Jarosław Kaczyński, the leader of PiS and Poland’s de facto ruler, said during an election rally earlier this month. He added: “There is no Poland without the church.”

Kaczyński was speaking after a recent speech in Warsaw by Donald Tusk, the president of the European Council and a former Polish prime minister. Tusk had been introduced by Leszek Jażdżewski, a left-wing publicist, who used the occasion to denounce the power of the church in fiery language: “The Catholic Church in Poland, beset by pedophile scandals, engaged in a battle for money and moral influence, has lost the ability to act as the conscience of the nation.”
Jażdżewski was subjected to a torrent of abuse from the government and its media backers. Many opposition politicians scrambled to distance themselves from his words, afraid of angering the church and its followers, although Tusk did not.

ion Day to the blessing of a new fire engine — takes place without the participation of the clergy.
The problem for Law and Justice is that its alliance with the church now risks tarring it with the church’s internal problems.

“I’m not sure the film is a game changer, but it’s certainly not helping PiS,” said Migalski.

Lust like Ireland – things looked okay on the outside but there was great rottenness and corruption on the inside.

The old whited sepulchre that Jesus Himself spoke of.

The RC church has been a very dangerous and life destroying place for so many poor victims.

If there were proper justice in the world the Vatican and the RC institution would have been regarded as a “rogue state”.

But ordinary people are taking action – by walking away in droves.

The Polish are famous for their Catholicity.

From now on they will walk away too.