Image captionMonika, now 28, has spoken of years of abuse as a teenager at the hands of priests
Marek Mielewczyk was a 13-year-old altar boy when a priest asked him to come to his presbytery.
“This is where I was abused for the first time,” he says.
He is one of several victims, now adults, featured in a documentary about Polish priests who sexually abused children.
Tomasz and Marek Sekielski’s film, Don’t Tell Anyone , was watched 20 million times in the first week of its digital release – and prompted an unprecedented challenge to Poland’s Roman Catholic Church.
More than 90% of Poles identity themselves as Catholics. For many, the Church and its rituals do not just provide spiritual comfort: they are part of a national identity.
That might explain why Poles have been slow to question the behaviour of some of their own priests, despite sex abuse scandals in the Catholic Church in Ireland, the USA and neighbouring Germany.
Monika, 28, did not appear in the film. But she told the BBC about years of abuse during supposed exorcisms by priests around Poland when she was a teenager.
Her parents saw the priests “as heroes, people who were fighting against the devil himself” – but she believes they were manipulated.
You may find some of the details in this story upsetting.
The Catholic Church defended Polish culure, language and identity as the country was ruled by three occupying empires in the 19th Century.
After World War Two, the Church – and Polish Pope John Paul II – gave strength to the democratic Solidarity movement, helping it overthrow communist rule.

Image captionPolish bishops last month held a special mass as they considered the repercussions of the scandal
But the documentary has sullied that reputation.
Shortly after the film’s release, an opinion poll suggested 67% of Poles regarded the Church’s response as inadequate and 87% said its authority had been diminished.

How Marek challenged the Church

The abuse continued until one Christmas Eve when he was 18, and he tried to kill himself by taking pills. His parents only discovered what had happened to him after he told a doctor why he had been suicidal.
When the doctor informed the local bishop about the case, he wrote back saying he was aware of the abuse.
Marek, now 50, has identified his abuser as Fr Andrzej Srebrzynski, and the documentary says the priest was subsequently moved from parish to parish for the next 28 years.
He was only removed from the priesthood in 2015. Even then, he was filmed taking part in a religious procession wearing his priestly vestments.
Fr Srebrzynski denies abusing Marek, arguing that it was another priest who molested him. A judge in 2017 ordered him to apologise to his victim, and he is appealing against the ruling.

How damaging for Church?

“There are no words to express our shame,” Polish bishops said in a statement issued in the days following the documentary’s release – acknowledging they had not done enough to prevent abuse. 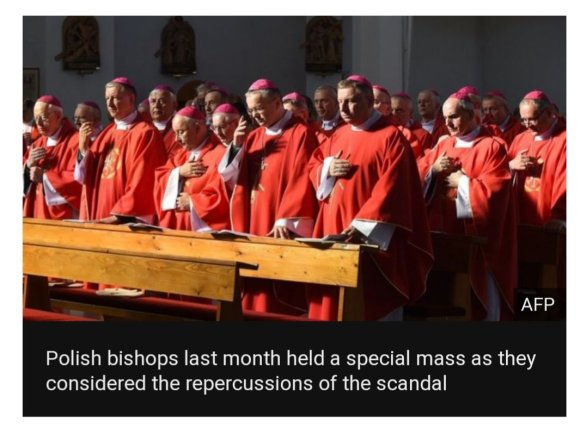 Adam Szostkiewicz, a columnist for Polityka weekly, believes there is now a readiness for people to make the bishops responsible for their silence.
“This process will take time, but for me, it’s a point of no return for the Church,” he said.
“But for some Poles, if they lose the Church, it’s like they lose a part of themselves. They prefer to close their eyes,” he added.
“They see the Church as their mother, and you cannot say bad things about your mother.”

‘Nobody tried to stop him’

As a teenager growing up in a small town outside Warsaw, Monika – not her real name – was fascinated with black clothes, heavy music and drawing vampires.
Now an art student, she says her years of abuse began when a priest convinced her parents that she was possessed by an evil spirit, and began performing exorcism rites on her.
Soon, she was being taken around the country for so-called treatments by other priests.

&quot;I was someone who liked art and was a little bit over sensitive and they turned me into a psychological wreck. They destroyed me&quot;, Source: Monika, Source description: Aged 28, Image: Inka

On one occasion, she said she was taken to a tiny basement room where there was a bed with leather straps.
“This priest strapped me to the bed and literally tortured me. He had lay people helping him, and this priest would shove a crucifix down my throat until I started to bleed,” she told the BBC.
“He started drowning me on this bed. He would pinch my nose closed and pour water down my throat. Nobody reacted or tried to stop him.”
Another priest she describes as a sadist. “He would strangle me and pin me down by lying on top of me. I could feel he was sexually aroused.”
She says he would tie her to a church pew or a radiator for so long that she wet herself.
While staying with one of the priests she would sleep in his bed. “He would drink alcohol. He also did things; he was a man with a teenage girl in his bed,” she said.
Monika only managed to escape with the help of her friends after they learned of her suffering.
She has since been diagnosed with post-traumatic stress disorder and dissociative identity disorder. She has sought support through the Nie Lekajcie Sie (Have No Fear) foundation which helps abuse victims.
She started legal action but prosecutors dropped her case after a court-appointed psychologist, whom the foundation says has close links to the Catholic Church, suspected she was lying.
The foundation sought another psychologist’s opinion, who found her story credible, and Monika is appealing against the prosecutor’s decision.

How is Poland responding?

The Have No Fear foundation is drafting a citizens’ bill to enable victims to file historical claims against priests and to allow for the creation of an independent truth and compensation commission, modelled on those set up in Ireland, Germany and Australia.
Poland’s conservative Law and Justice government is creating a commission, but with members appointed by politicians rather than experts. The party enjoys the support of many priests for its backing of Catholic values.

Image captionEarlier this year, a statue was pulled down in Gdansk of a priest who was defrocked in 2005
The government commission will investigate professions such as child-care and teaching as well as the Church.
Marek Mielewczyk, who is now a grandfather, realises the fight for justice will take time, but he’s happy it has at least begun.
After watching the documentary, his eldest daughter texted him “Daddy, I love you”.
“It was very moving for me. All those years of hard work had been worth it,” he said.

Here we read of the intense sufferings of Polish children and their families.

Another part of the empire where abuse, corruption were all covered up.

And just as Catholic Ireland is in the process of making the RC junta here an evil irrelevance so will the Polish do in the near future.

I have no regrets about giving my life to faith and God but if I had to do it again it would not be in the context of the Roman Strumpet.

What has represented itself as being of God has in reality being of Satan.