by Sarah Mac Donald The Tablet 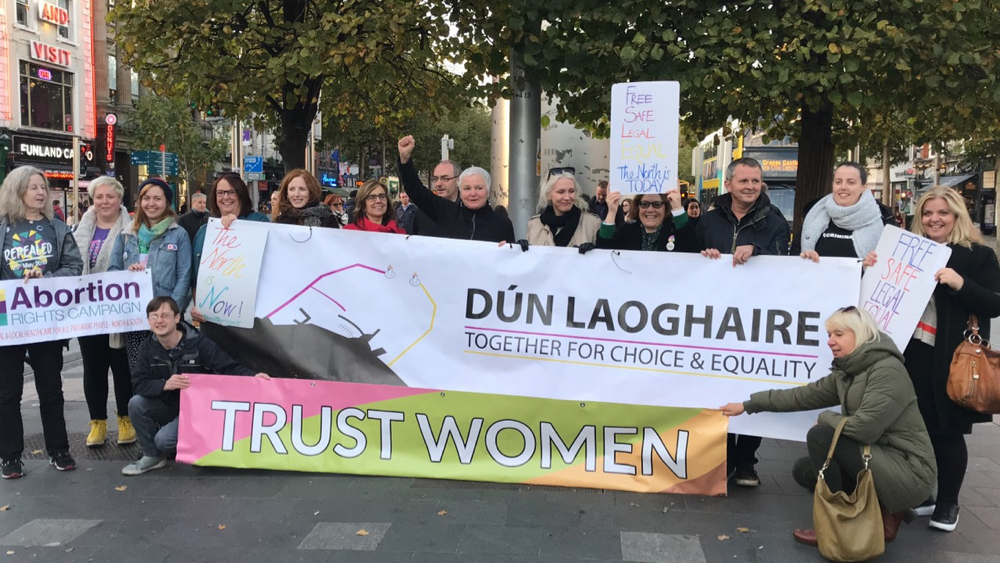 A rally in Dublin last month to celebrate the eminent decriminalisation of abortion and gay marriage in Northern Ireland.

An Irish priest who is to be honoured by President Michael D. Higgins later this month for his work with HIV/AIDS sufferers has said many priests in the church are “completely schizophrenic” when it comes to homosexuality.

London-based Fr Bernárd Lynch told The Tablet that he was shocked by the number of priests who were having “disembodied sex” with gay escorts and prostitutes in Rome. Yet these same clerics strongly voice the church’s teaching on homosexuality.

The 72-year-old was speaking after his address, titled Vatican Hypocrisy and Hopes for our Church, at the Loyola Institute in Trinity College Dublin this week, which was hosted by the lay reform group, We Are Church Ireland.

“In the church, as a gay man or woman, you can have sex with as many people as you like and go to confession and get forgiven. Yet if you live in a stable committed faithful loving gay relationship you are living in sin,” he said.

The psychotherapist said the church’s harsh teaching on LGBTI relationships worked against “sexual and psychological health” and he argued that the Church needs to promote an integrated sexuality.

“Either our sexuality takes us closer to God or it alienates us from God. I don’t mean to be simple or simplistic when I say we must talk about God and sexuality.”

Fr Lynch, who was suspended from his order, the Society of African Missions when he was 65 after he admitted he was in a long-term partnership, married his husband Billy Desmond in 2017. He remains a Catholic priest. “My priesthood is as much a part of me as my gayness,” he stated.

But he hit out at those priests who try to be straight when they are gay, describing their attitude as “pure blasphemy”.

“What we are doing in such situations is basically saying to God that what you created me to be in my essence is not good enough. Take it back.”

He said: “This kind of pathological behaviour is encouraged and endorsed by the official line of the Vatican. It has destroyed the life and the souls of so many good people.”

He said the revelations in the book ‘In the Closet of the Vatican’ by Frédéric Martel contained “nothing that surprises me” and warned that the more homophobic priests are, “the likelier it is that they are homosexual and they are practising”.

Elsewhere in his address, Fr Lynch said: “Misogyny and homophobia are intrinsically linked”. He told the audience that he did not want his freedom as a gay man “until you free my sisters to be equal”.

He said: “The teaching that women are unequal, and that gay people are disordered in their nature and evil in their love, which is still the official catechism line, is pure pathology. It is women, I believe, that will free the church and that is what the men are so scared of.”

The Ennis native is to receive the prestigious Distinguished Service Award for the Irish Abroad from President Michael D. Higgins on November 21 in recognition of his AIDS/HIV ministry with Dignity New York.

Fr Lynch organised the first ministry to people with AIDS in New York city and was involved in Mayor Koch’s task force on AIDS.

Of his ministry he recalled: “When AIDS hit us like a nuclear holocaust in the early 80s, I witnessed first-hand the decimation of an entire generation of young men in their 20s and 30s.”

By the end of 1982, three of his closest priest friends had died of the disease. “Priests had the worst deaths of all because of the guilt, shame and total ostracisation by our church.”

As a priest and theological consultant to Dignity New York he saw person after person fall prey “to this unknown and ignominious disease”. He said 600 of their membership died in less than 10 years.

As far as I am aware that award is due to Father Lynch today.

I’ve known Bernard for a long time and regard him as a very decent, compassionate human being and priest.

I got to know him when I was Crohns Disease patient in St George’s Hospital, Tooting, London in the 1989s and he came to visit me. I knew no one on London at the time.

Father Lynch has done trojan work on behalf of the LGBT and HIV communities.

And in the beginning he did it in the face of evil and extreme action by the RCC in New York.

And Bernard has had very good advice for priests and the church.